skip to main | skip to sidebar

Silky Big Boy 2000 Folding Saw.
I have been testing Silky Saws this season and am very impressed with their cutting performance!

The Big Boy 2000 is probably the most practical for camp or survival use. It weighs 14.5 ounces and folds down to a compact size yet it cuts like a chainsaw. I think it keeps up with and could out work a 24" swede saw by a experienced user.

Now these Silky Saws use a Japanese tooth pattern that cuts on the pull stroke.When using them you loosen up your grip on the push stroke and when you pull back is when the cutting teeth dig in. Speed wise they still cut very fast even though you are doing your work on the pull stroke. The pull stroke uses the natural ergonomics of your body as it is easier to pull than to push.

When running cutting tools like a knife, axe, or saw I always teach to let the sharp tool do the work! You DO NOT muscle sharp tools! You will be far more proficient with cutting tools when you can let the tool do the work while you work in a steady rhythm. These Silky saws take a little getting used too, you really do not have to put much of your own weight behind the pull stroke to make them cut. If you put too much of your weight on the saw when pulling they dig deep!


Another feature I quickly realized while cutting saplings for projects is that the saw is long enough that you do not have to bend over much to cut a sapling. This is super handy when dealing with thick clusters or tag alder or willow.

Pictured below with a 19" GB Small Forest Axe. You could put up a small cabin with this compact lightweight tool combination and easily carry it in a day pack!


Check out the Silky Big Boy 2000 you wont be disappointed!

Happy People: A Year in the Taiga...Movie Review

Happy People: A Year in the Taiga is a documentary by Werner Herzog that documents fours seasons of life in a northern Russian village along the River Yenisei.

This movie had alot of cool bushcraft skills being used in daily life. It is very neat to see how the traditional skills being used have a slightly different twist in the Russian culture. Some of the highlights where the type of deadfall trap they build to catch sable which is like a pine martin, the ski/snowshoe they build, the type of dugout canoe they build, using birch tar as a insect repellent..etc...I have watched it several times and would like to pass it on to those of you who are interested...here is a trailer

How to choose a bush axe

Now that you realized you are a woodsman you are going to have to get yourself an axe.
Choosing an axe can be a little difficult if you have not used many axes or axes in different sizes before. Here are some points to consider when choosing an axe.
Point 1  ..The bigger the axe the more work it will do, this may seem overly simple but bigger is better when you are trying to  "do work". Two axes with the same head weight will perform similar if sharpened about the same, but now if one axe has a longer handle this axe will have more leverage and do more work. This would also be true if two axes have the same length handle, the axe with the heavier head will do more work.
Point 2  ....You need to be realistic on what type of camping you do. Depending on how you travel will decide a lot on what size axe you can comfortably carry with you. It will be no use to own a axe that is too large to carry in a rucksack and then you end up leaving it at home, or owning a small 19" axe and expecting it to do heavy chopping and splitting.
So the basic advice again is to choose the biggest axe you can comfortably carry with you.
For myself I use the 19" axes a lot in a day pack or for a lightweight hiking pack.The 19" axes are perfect for this type of travel.
I use the 26" axes for most of my other travel, in cold weather where I need to harvest a lot of firewood I combine the axe with a 24" swede saw and I also may choose a larger 31" axe when it is appropriate.
Here is a youtube video covering some of these thoughts as well...hope it helps...
Posted by Ben at 1/01/2012 4 comments:

I think that I would be more comfortable traveling nude in an Alaskan blizzard than walking into the woods without my trusty diamond sharpener tucked safely in the side pocket of my pants.  I never thought I would have the occasion to do either until I recently committed myself to a week long trip without taking any manufactured sharpening gear.  My intent was to learn to use only what I found in the wild for my honing needs, and to add another item to my list of bushcraft and survival skills.
While reading the 1891 journal of famed Alaska explorer Frederick Schwatka, I ran across a passage where his group had shot a moose to supplement their dwindling rations.  Before butchering the moose, his Indian guide spent over an hour looking for a “proper stone” to sharpen his knife.  In another old journal, Eskimo carvers were having a good laugh at white traders who had carried whetstones from New York to western Alaska by train, then steamship, then dory to use as trade items.  The carvers quickly proved that the stones they had found in nature were far superior to the ones offered as trade. This convinced me that staying naturally sharp was a viable idea.  Soon I was off on a foray in the Bush (gulp) with no commercial sharpening gear whatsoever.
We arrived in camp on the southern tip of Kodiak Island.  As is the usual case, someone borrowed my knife and then someone else, and soon it was time to dress the edge.  As I began my search, it was apparent that natural stones rarely provide a flat surface, and that most are so rough that they just make matters worse.  However, the smooth stones found in riverbeds, on ocean beaches and in glacial till provided a solution.  By holding the blade still and making circular motions with the smooth stones, a decent edge was achieved.  It was a slow process compared with modern diamond sharpeners, but I was pleasantly surprised with the results.  I learned that almost any somewhat smooth stone would in time produce a suitable edge, even on high-tech stainless steels.
By using a succession of three stones of differing coarseness and my belt for a strop, I was eventually able to shave a patch of hair off of my arm.  The slowness of the process was due in part to the softness of the finish stones, but was also likely due to their rounded shape, which allowed only a small portion of the stone to touch the blade at any one time.  This has a clear parallel in manufactured products, as a flat, diamond bench hone works much faster than a round diamond stick of the same grit.
The most aggressive stones were made up of different varieties of quartz. Quartz would be somewhere in the 70’s on the Rockwell scale, so it easily cuts blade steel.  The quartz stones glazed over with metal particles in a short while, and no amount of water would slow the glazing, but there were plenty of the rocks available to replace the glazed ones.   The softer shale put on the finest edge, but it was the quickest to glaze over. 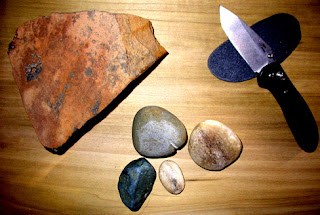 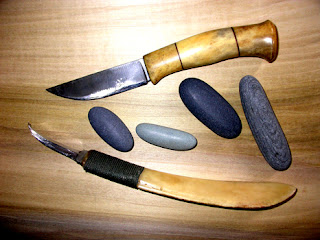 In later travels to the Continental US, I followed the advice of an Oklahoma elder who told me that common sandstone would not glaze over, especially when water is used for a lubricant.  She had sharpened her kitchen knives on her sandstone back steps for over a half century.  I have now sharpened my own kitchen knives on sandstone for the past few months and find that although the process is labor intensive, the edge produced is approximately equivalent to that of a 600 grit diamond hone.  The glazing is avoided because, as with Japanese water stones and soft Arkansas stones, the surface wears down, continually exposing fresh abrasive material.
To achieve the best possible edge, stropping is a must.  Without the strop an otherwise sharp knife can perform the same as a really dull one.  The purpose of the strop in this case is simply to remove the wire edge that forms while working on the stone.   There are many options that will serve well as a strop.  Of course the back of a leather belt works fine.  Choices also include canvas (I use the leg of my work pants) dry cardboard, boot tops, nylon strapping and so on.  The formal woodcraft schools in Europe have even taught stropping on the palm of the hand to attain the finest edge. (Do not try this at home without adult supervision.)
A dependable, modern sharpening system should always be a part of every outdoor kit; however, a basic premise of bushcraft is to learn to use what nature provides.  It is good to know that, with practice, there are alternatives to manufactured products.
Posted by Ben at 11/11/2010 4 comments: